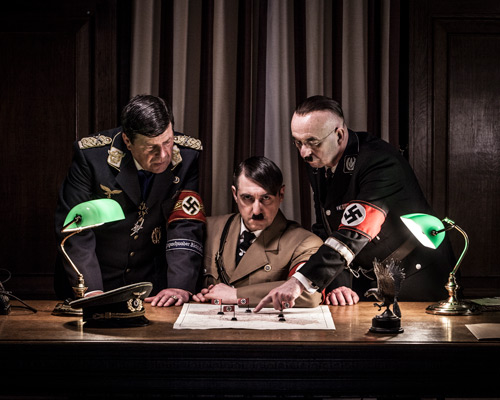 Hitler’s Circle of Evil: a factual series that was constructed as a drama and caught the attention of  younger viewers.

It’s The Medium Not The Message

Younger viewers will watch older-skewing content if it is presented correctly.

The rise and rise of the SVoD platforms and the shift of advertising away from terrestrial channels to social media and digital platforms means that the television industry is, as we’re all aware, going through a period of turbulence.
The subscription streaming exemplified by Netflix and Amazon is here to stay, not because of all the Silicon Valley money that supports it, but because of a far more important reason: it has captured the younger viewer. The streamers need people to watch their screens – and the most powerful way they can reach that goal is to secure the young.
Younger viewers are bingeing on television on just about any device, which is fuelling the rise of the box set. My experience is that provided the factual series we produce for Netflix are constructed like dramas, the audience will watch them – even if they are about subjects that, if broadcast on a terrestrial channel, would deliver an older demographic.
It’s fascinating to read social media posts from evidently younger Netflix viewers, such as this one about one of our recent productions: “Watching Hitler’s Circle Of Evil (pictured) and there seem to be parallels with the politics of today.”
Particularly in today’s febrile political atmosphere across Europe and the US, many old topics are being revisited by new eyes, which can only be a positive thing.

Viewing demographics are becoming ever more determined primarily by the delivery system and content structure and less by subject matter.

All of this poses a growing problem for advertiser- supported networks. How can they attract the younger viewer if their scheduled model is increasingly rejected by that vital and lucrative demographic?
I’ve come to the conclusion that viewing demographics are becoming ever more determined primarily by the delivery system and content structure and less by the subject matter.
If the content is structured as a dramatic story, SVoD viewers will watch it regardless. I am a little sceptical about terrestrial broadcasters going too far down the road of producing shows centred on social media to attract a younger viewer and win back the audience. It’s not the message – more and more, it’s the medium that matters.
The demographics of the terrestrial channels remain stubbornly old. The average age of the BBC1 viewer is apparently 61. Surely the way to maintain audiences on the terrestrial channels is therefore to serve the older audience with the fantastic content that BBC television often does so very efficiently.
Brands are powerful and attract a loyal audience. That’s why it is better to call a packet of soap flakes ‘Persil’ and not ‘detergent’.
The question for the terrestrials is therefore how far they can attract younger audiences over to old brands being served up via new media platforms. As for a BBC/ITV SVoD service, it will have to be very carefully positioned and branded to make sure that the channel brands don’t deter younger viewers.
What do all these shifts mean for television production companies? Given the growth of SVoD, they increasingly need to find ways to gain the expertise and reputation for making long-running, binge-watchable series.
This is not straightforward. It means recruiting producers who understand how to structure a series using dramatic storytelling with cliffhanger endings – compelling the viewer to watch the next episode.
It also means, in the case of factual television, being able to shoot drama-documentary. And it means, crucially, being able to identify stories that are sustainable for up to 10 episodes and have some topical relevance, even if they are set in the past.
Above all, for both producers and broadcasters, it means looking at the world in the same way as the viewer who is watching on a hand-held device on a train. In a real sense, that thing in the corner of the living room, the television, is on its way out. But, strangely, that means there will be even more television.